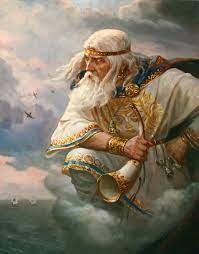 The Solomonari (called after the supposed connection between Solomon and alchemy) were shaman-priests who claimed control over storms and could summon a dragon to ride.

Before Christianity, they were seen as benevolent forces, but Christians defamed the Solomonari as devil-worshipers, while in reality they originated as pre-Christian pagan priests: they worshiped the pre-christian god Zalmoxis, whose power they are able to wield.

The Scholomance is a school that began in the heart of the mountains, and where all the secrets of nature, the language of animals, and all kind of magic spells and charms are taught to the disciples.

Scholomance is not a satanic school!!!

All over time, writers and novelists used this cult to create heroes for horror stories, altering the truth, and also the christian church hid, and distorted all available information.

The scholomancers are people with unusual powers, that can call the rain, talk to the nature, and read the stars.

Scholomancers were not ginger men or giants, but mere people born in the mountains of Dacia, and taught the secrets of nature.

They also were not devil’s worshipers, as they believe in Zalmoxis, and not in the christian god.

A Few Directions on Feng Shui

A Few Directions on Radiesthesia (Dowsing)

Short Story of The Hollow Man, and The Goddess of Life

What it's All About: